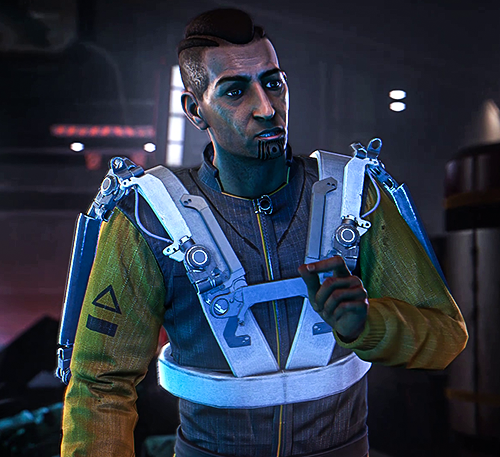 The Engineer Ram Tah, in the Meene system, has issued another “exciting opportunity” Again this sends us out to the Guardian sites. But this one is different. This one will reveal information about The Guardian’ Society.

There is a nice audio log of the mission. Have a listen to this :

Whilst scanning the Obelisks at the Guardian Sites, something very interesting popped up in my inbox :

Guardian Starships which we might be able to actually fly !!! 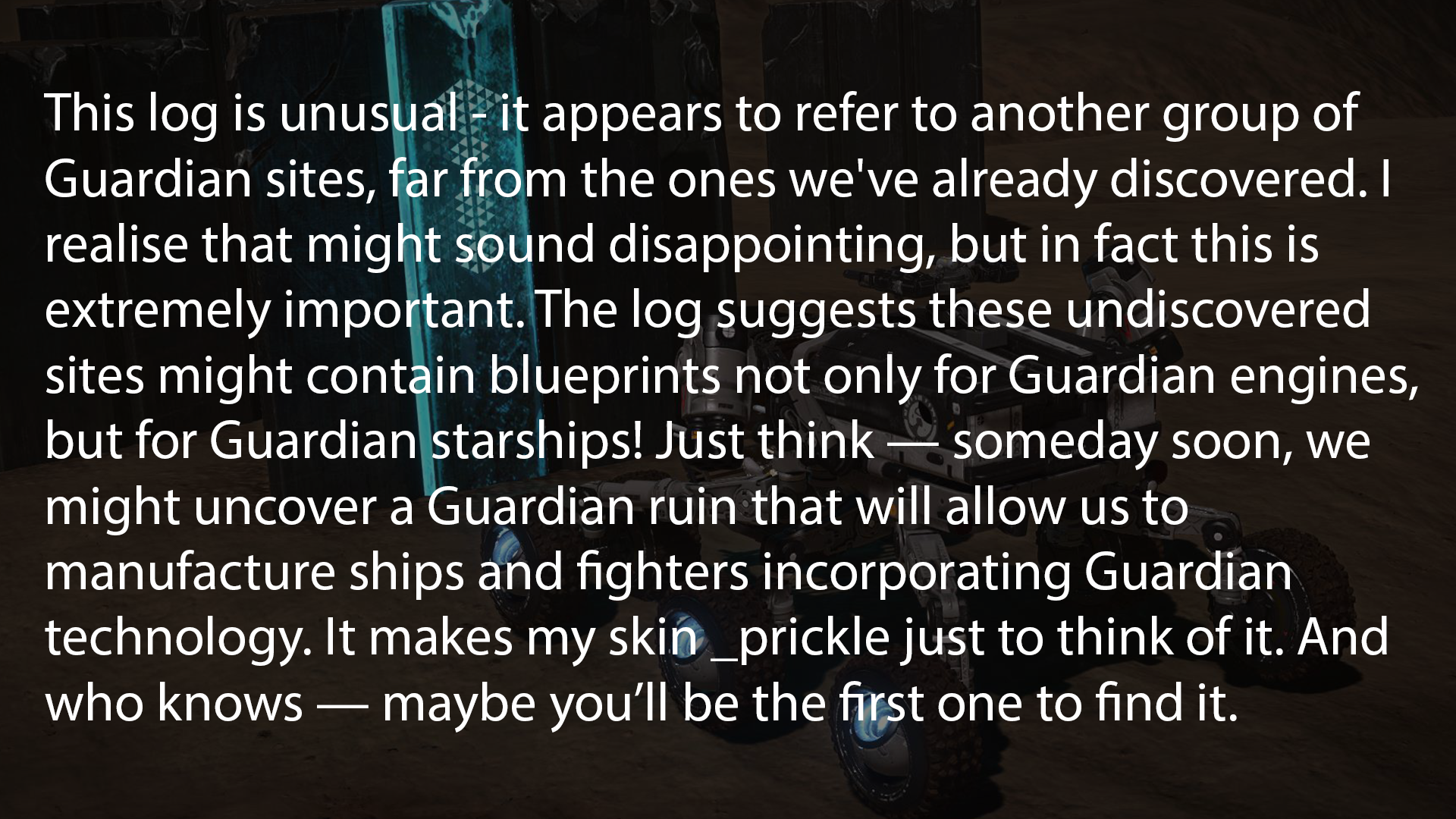 The new Ram Tah mission can be found at these two locations: MITCHELL or WEBBER DOCK in the MEENE system. The old mission is still available, however you need to head over to Felice Dock to pick-up that one.

This is a very useful tool in finding all the sites needed for you to complete the mission. Thanks scientists! you guys are all awesome!

Things You Will Need

You will need to kit out your ship for this mission. You will need a long range exploration vessel. The new Guardian Structures are around 800 Ly’s from Sol. 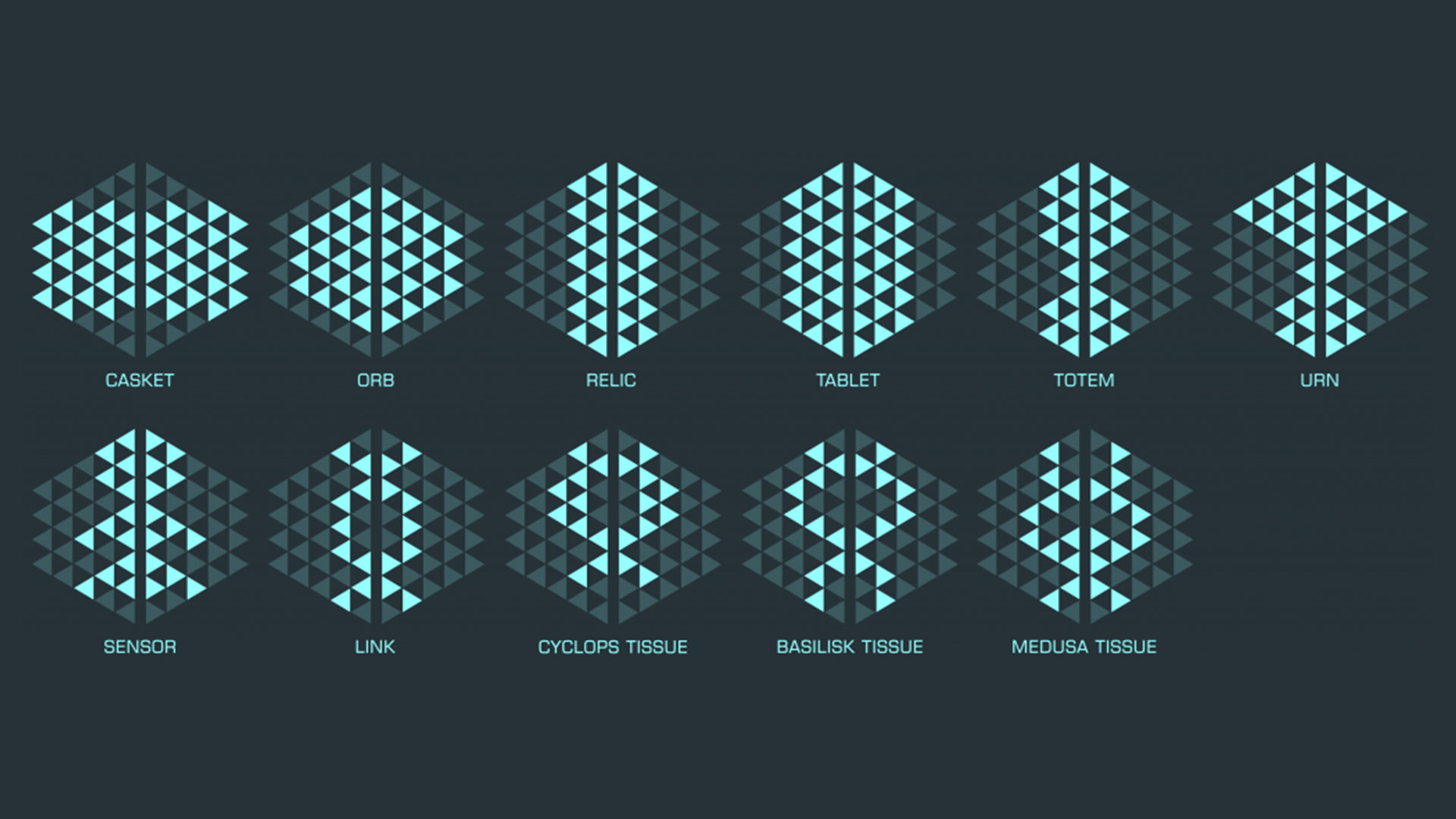 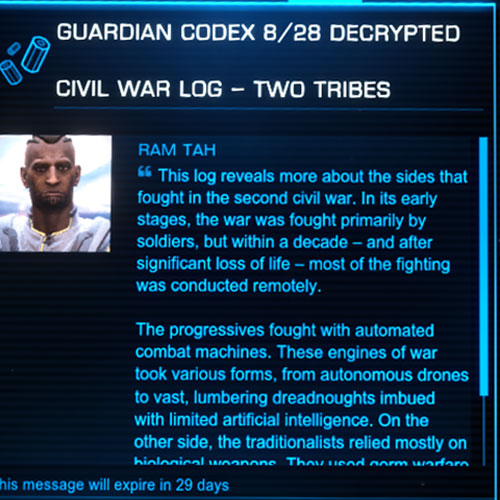 This log reveals more about the sides that fought in the second civil war. In its early stages, the war was fought primarily by soldiers, but within a decade – and after significant loss of life – most of the fighting was conducted remotely. The progressives fought with automated combat machines. These engines of war took various forms, from autonomous drones to vast, lumbering dreadnoughts imbued with limited artificial intelligence. On the other side, the traditionalists relied mostly on biological weapons. They used germ warfare alongside long-range missiles loaded with corrosive enzymes, which could target the enemy’s war machines from a great distance. 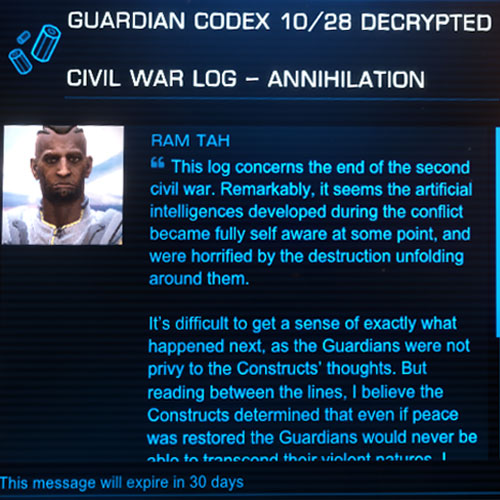 This log concerns the end of the second civil war. Remarkably, it seems the artificial intelligences developed during the conflict became fully self aware at some point, and were horrified by the destruction unfolding around them. It’s difficult to get a sense of exactly what happened next, as the Guardians were not privy to the Constructs’ thoughts. But reading between the lines, I believe the Constructs determined that even if peace was restored the Guardians would never be able to transcend their violent natures. I believe they decided that the only way to preclude further violence – while giving their own burgeoning society the best possible chance of survival – was to destroy what remained of the Guardians’ civilisation. By this time, the Constructs had complete control of the Guardians’ munitions and automated war machines. Their attack, when it came, was swift and merciless. Strategic nuclear and chemical-weapon strikes were executed with a precision that only a machine race could accomplish. The few that survived were able to record what had happened, but they soon succumbed to radiation poisoning. The Guardians were utterly destroyed. 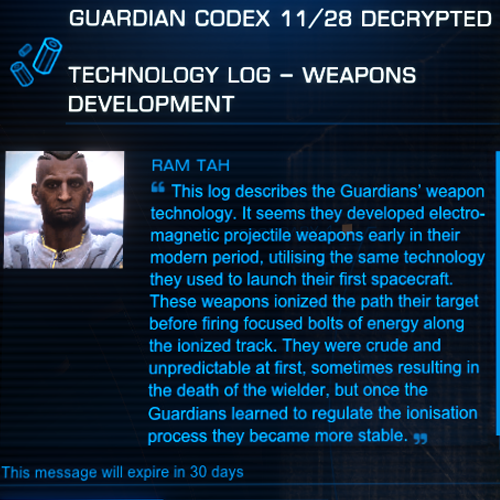 This log describes the Guardians’ weapon technology. It seems they developed electro-magnetic projectile weapons early in their modern period, utilising the same technology they used to launch their first spacecraft. These weapons ionized the path their target before firing focused bolts of energy along the ionized track. they were crude and unpredictable at first, sometimes resulting in the death of the wielder, but once the Guardians learned to regulate the ionisation process they became more stable. 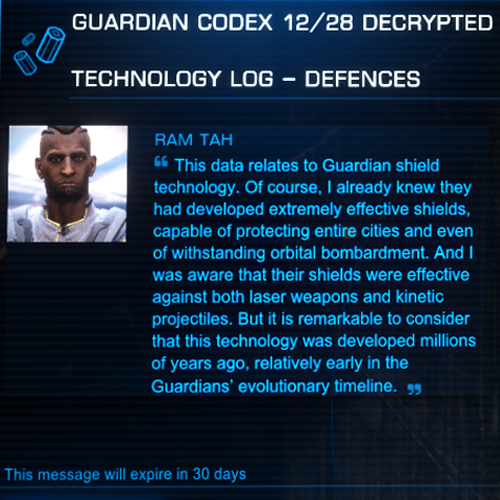 This data relates to Guardian Shield technology. Of course, i already knew they had developed extremely effective shields, capable of protecting entire cities and even of withstanding orbital bombardment. And i was aware that their shields were effective against both laser weapons and kinetic projectiles. But is remarkable to consider that this technology was developed millions of years ago, relatively early in the Guardian’s evolutionary timeline. 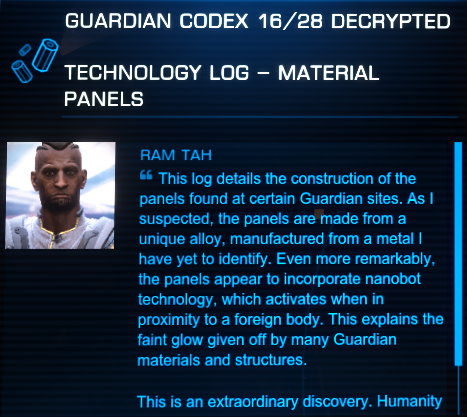 This log details the construction of the panels found at certain Guardian sites. As I suspected, the panels are made from a unique alloy, manufactured from a metal I have yet to identify. Even more remarkably, the panels appear to incorporate nanobot technology. which activates when in proximity to a foreign body. This explains the faint glow given off by many Guardian materials and structures. This is an extraordinary discovery. Humanity has dabbled with nano technology, but evidently the Guardians’ achievements far surpassed our own. 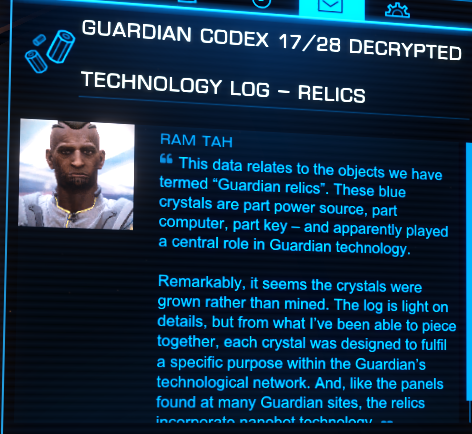 This data relates to the objects we have termed “Guardian relics”. These blue crystals are part power source, part computer, part key — and apparently played a central role in Guardian technology. Remarkably, it seems the crystals were grown rather than mined. The log is light on details, but from what I’ve been able to piece together, each crystal was designed to fulﬁl a specific purpose within the Guardian’s technological network. And, like the panels found at many Guardian sites, the relics incorporate nanobot technology. 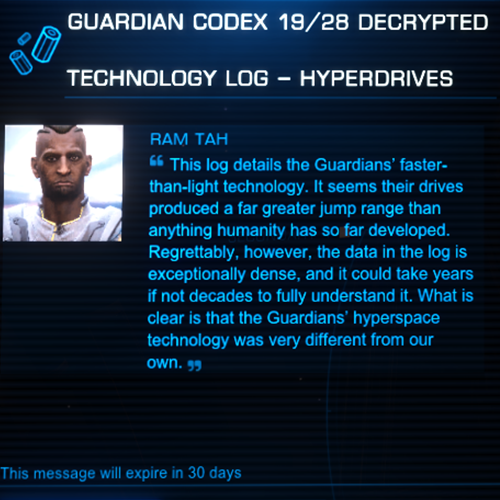 This log details the Guardians’ faster-than-light technology. It seems their drives produced a far greater jump range than anything humanity has so far developed. Regrettably, however, the data in the log is exceptionally dense, and it could take years if not decades to fully understand it. What is clear is that the Guardians’ hyperspace technology was very different from our own. 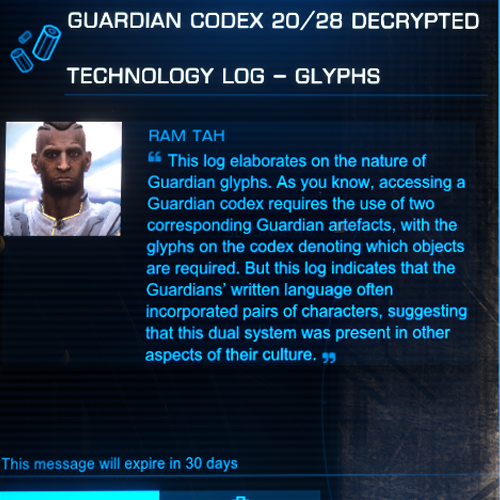 This log elaborates on the nature of Guardian glyphs. As you know, accessing a Guardian codex requires the use of two corresponding Guardian artefacts, with the glyphs on the codex denoting which objects are required. But this log indicates that the Guardians’ written language often incorporated pairs of characters. suggesting that this dual system was present in other aspects of their culture. 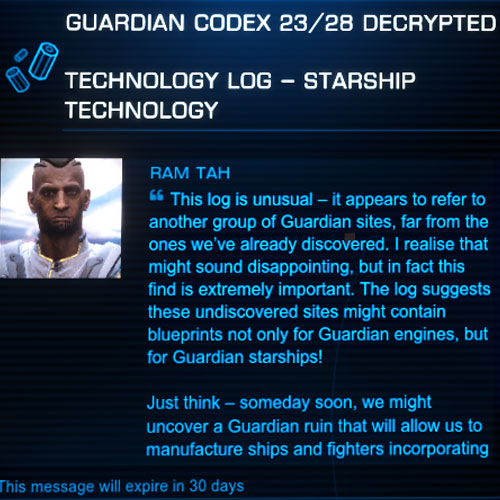 This log is unusual – it appears to refer to another group of Guardian sites, far from the ones we’ve already discovered. I realise that might sound disappointing, but in fact this ﬁnd is extremely important. The log suggests these undiscovered sites might contain blueprints not only for Guardian engines, but for Guardian starships! Just think — someday soon, we might uncover a Guardian ruin that will allow us to manufacture ships and ﬁghters incorporating Guardian technology. It makes my skin _prickle just to think of it. And who knows — maybe you’ll be the one to ﬁnd it. 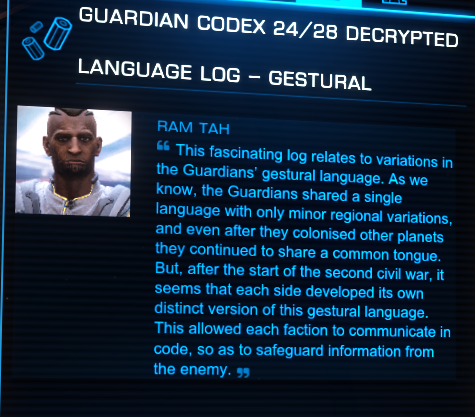 This fascinating log relates to variations in the Guardians’ gestural language. As we know, the Guardians shared a single A language with only minor regional variations, and even after they colonised other planets they continued to share a common tongue. But, after the start of the second civil war, it seems that each side developed its own distinct version of this gestural language. This allowed each faction to communicate in code, so as to safeguard information from the enemy.

Now, this log gives a fascinating insight into the Guardians’ neural-implant technology. The Guardians used these implants to connect cerebrally with their Al creations. Unfortunately, the technology was still in its infancy when the Guardians were destroyed. Apparently, the implants created a symbiotic link with the Constructs through implantable ﬁbres, which connected the central cortex to a multimodal interface within the Construct. Essentially, the Guardians were able to direct their creations with thought alone – at least until the constructs rebelled. 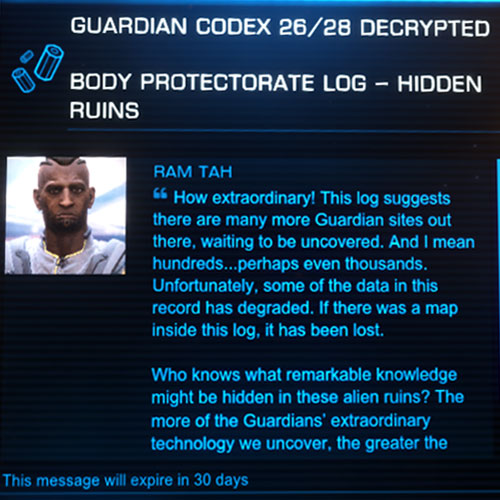 Hidden Ruins How extraordinary! This log suggests there are many more Guardian sites out there, waiting to be uncovered. And I mean hundreds…perhaps even thousands. Unfortunately, some of the data in this record has degraded. If there was a map inside this log, it has been lost. Who knows what remarkable knowledge might be hidden in these alien ruins? the more of the Guardians’ extraordinary technology we uncover, the greater the potential impact on our own technology. Locating further Guardian sites could help us take giant steps forward.