|In Thargoids, INRA
|By isokix

John Jameson was tasked with delivering the MyCoid weaponised virus to the Thargoids. From the commanders logs, taken from the crash site, it transpires that INRA disabled his ship and made it crash land into the planet. INRA wanted to be able to pin the incident on someone, if it wall went pair shaped. I guess what they actually did, was make John Jameson the most famous of all commanders. It’s just a shame he died in the process, making his wife a widow and his son without a father.

There are four red data points to scan which reveal the story of this infamous Elite Commander. There is a ship ID of JJ-386. Some say this is a nod to the Intel 386 CPU of the 1980’s, JJ – John Jameson.

The layout of the data points when viewed from above, looks like an arrow laid out on the ground. Is this pointing to something ? 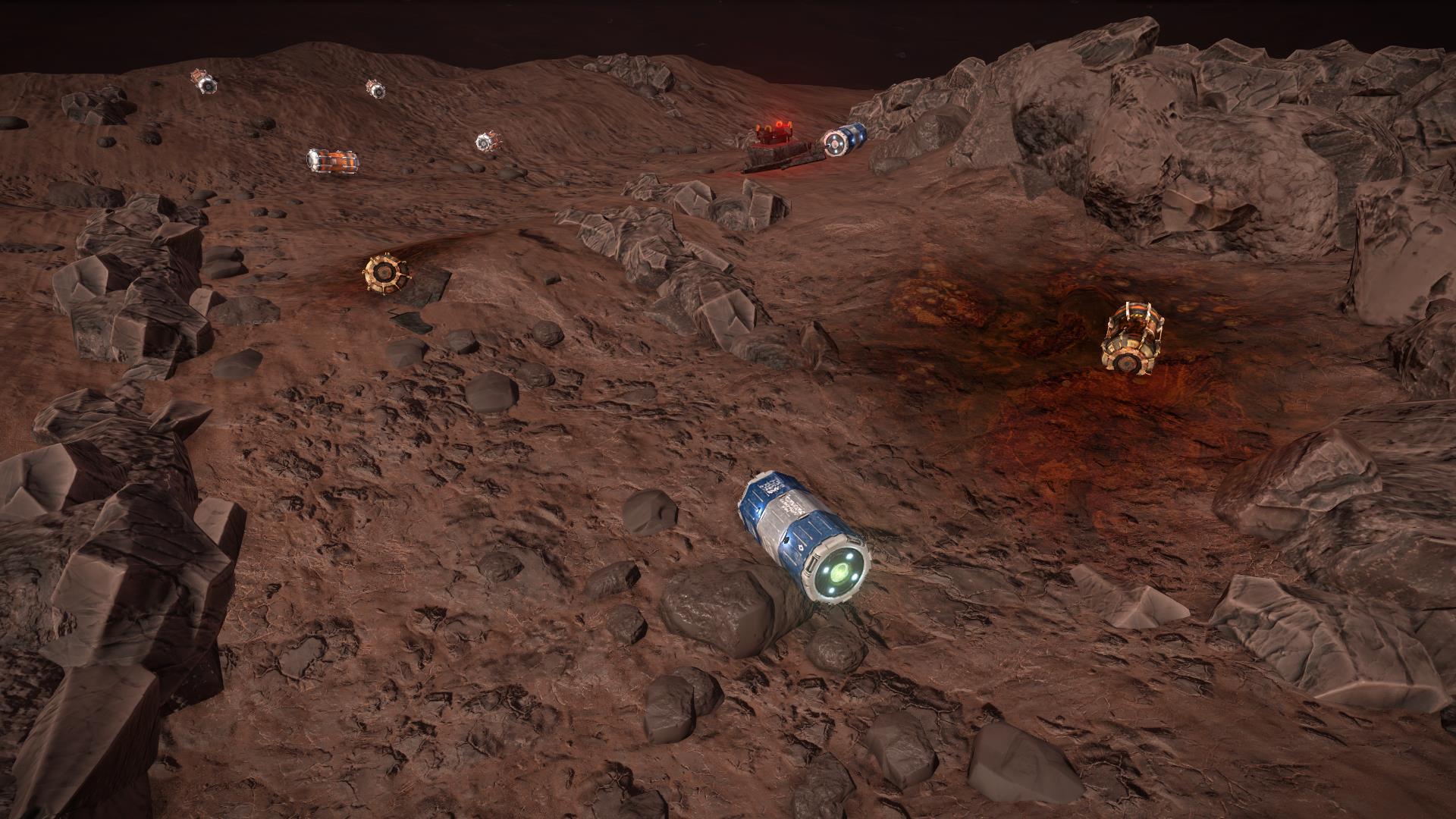 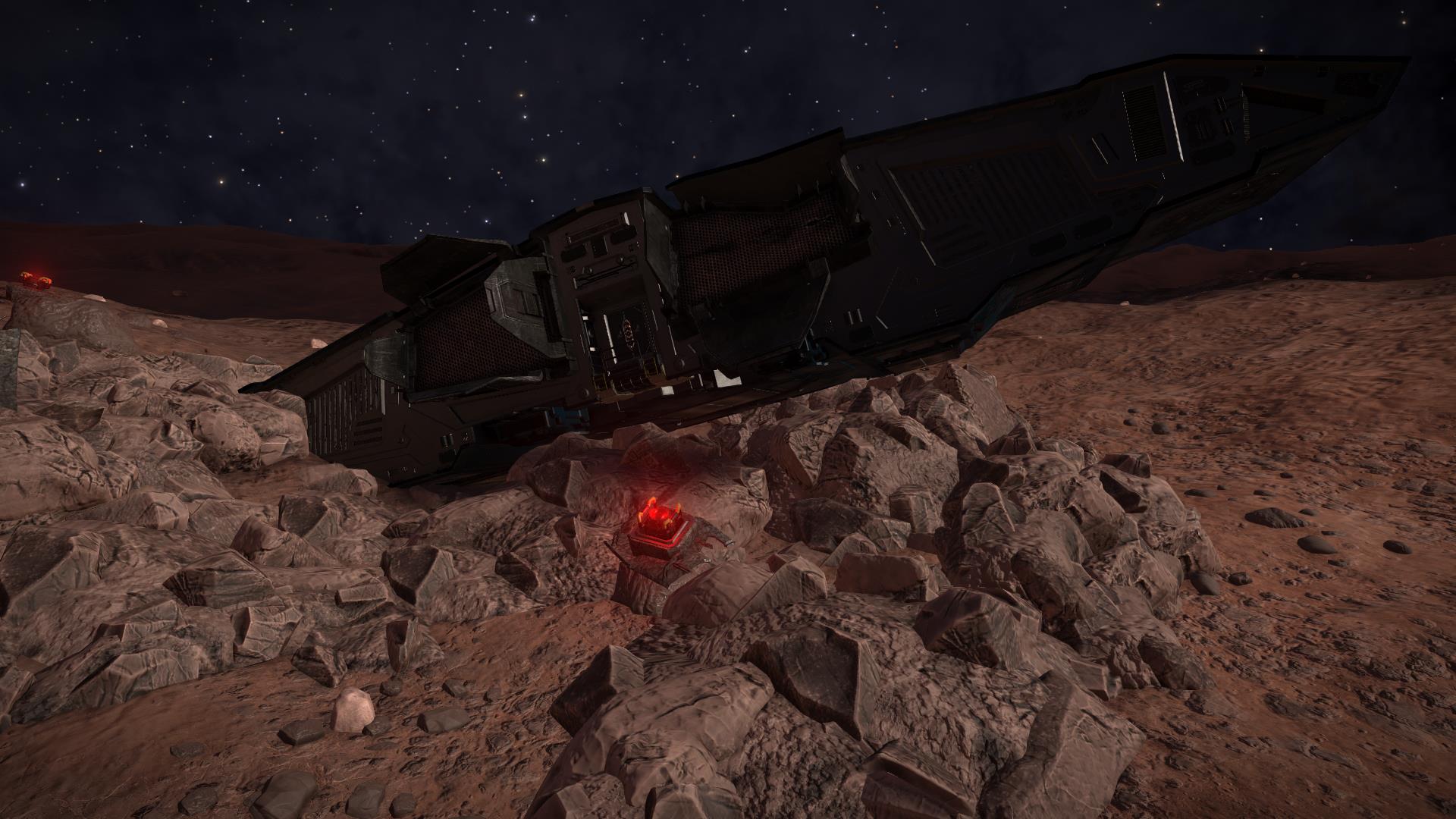 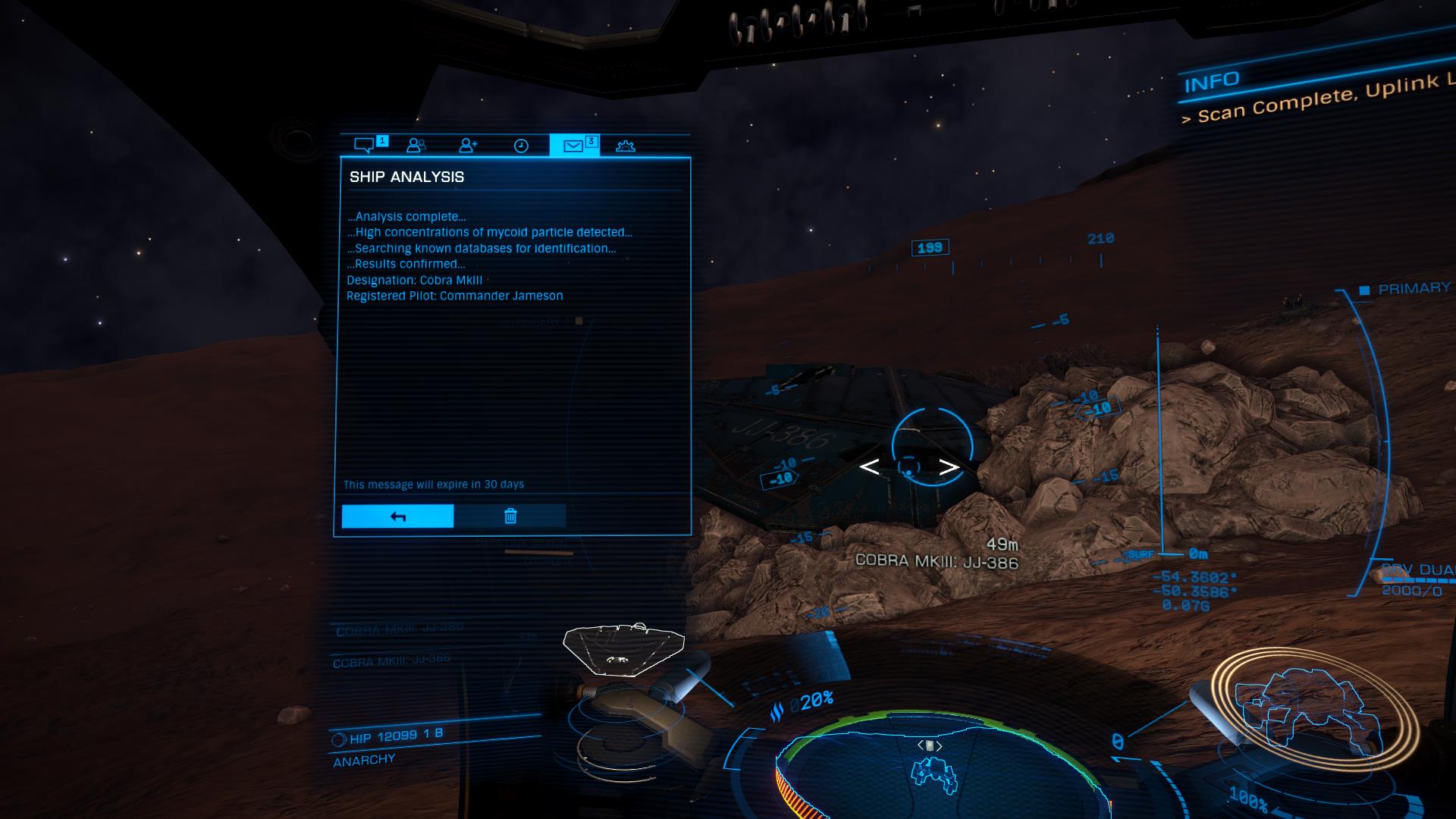 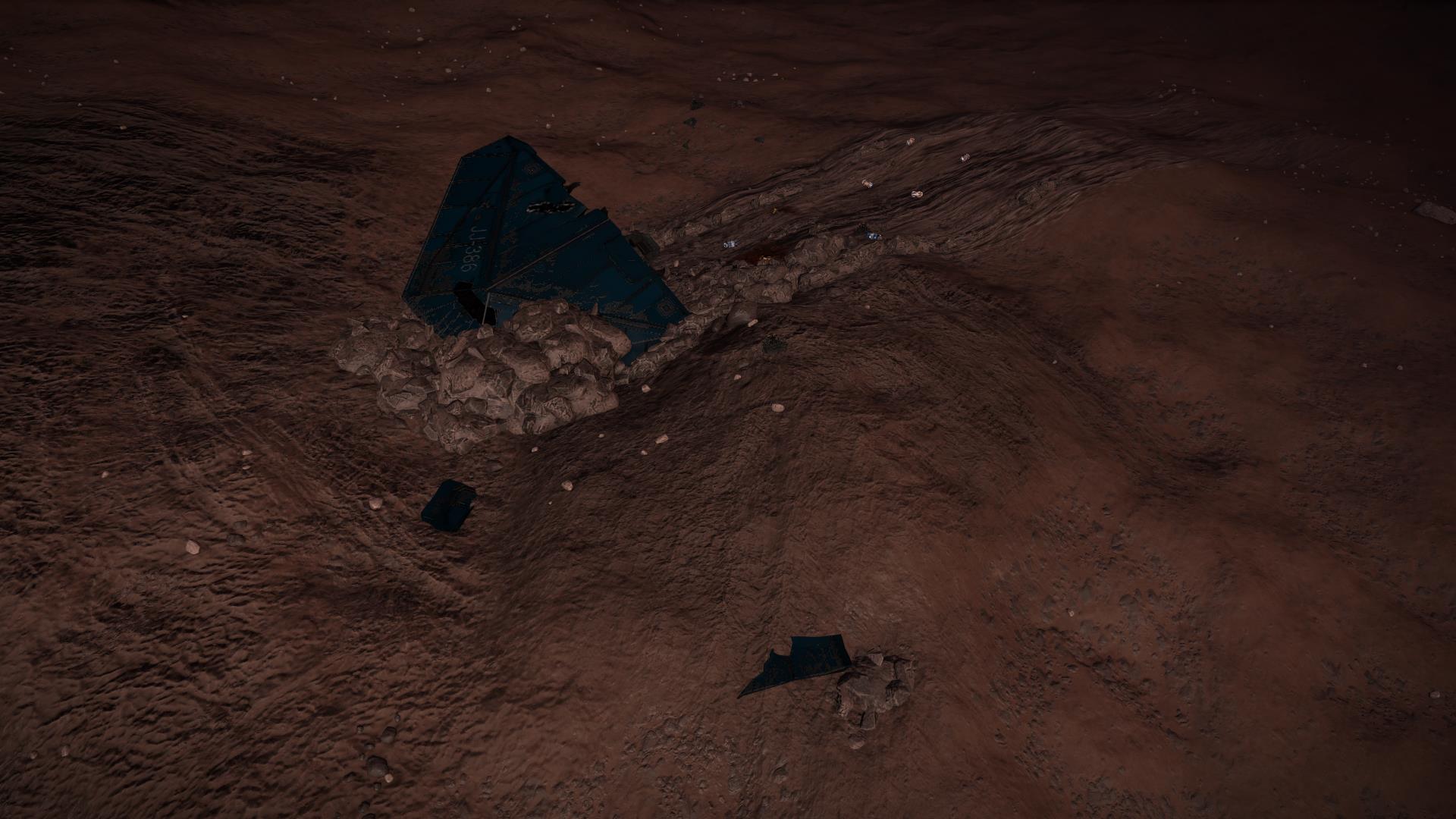 Hey there, kiddo. Now I know I said i’d be coming home soon, but they’ve asked me to do something – something important – and I couldn’t say no. I wanted to be there, believe me but sometimes you have to make sacrifices, well this is one of those times. I don’t know if that makes much sens to you, but maybe it will do when you’re older. Anyway, I thought I’d send you this log. I know it’s not the same as being there in person, but it’s the best I could do. I’m sorry. I’m not really supposed to talk about my mission, but if I’m going to miss your birthday the least I can do is give you a good story. Consider yourself sworn to secrecy.

I’m sitting in the cockpit, waiting for the all clear. They want to tinker with her for a while first, but they don’t seem to have done any harm. All systems online. Everything’s… everything’s looking good.

I’d be lying if I said I wasn’t feeling just a little jittery. You know I’ve fought bugs before, sure, but never more than one at a time. Flying up to one of their hive ships? Well, that’s a whole different story. Hell, I don’t even know what I’m carrying. Classified, they said. All I know is it’s designed to target the bugs’ hyperdrives so they won’t be able to leave the system. Of course if it dosen’t work, I’m just kicking the hornet’s nest. That’s why I’ve set the nav system to jump out as soon as I’ve deployer the payload. Can’t be too careful. Wish me luck.

That was almost too easy. Threaded my wau past their perimeter, masked my heat signature so I could get close to the superstructure. I tell you… I’d never seen a hive ship up close before. I doubt many people have. It was amazing, kiddo. Beautiful, realy. Makes you realise just how smart they are, how advanced. I admit it: I hesitated for a moment before I hit the button. I had to remind myself that it wasn’t them I was attacking, just their technology. That’s if this mycoid virus of theirs even works. Man, I watched the payload rocket into the belly of their ship and stuck around just long enough to make sure it hit home. Then I punched the throttle. Woah! I’m coming home, kiddo. I’m coming home. 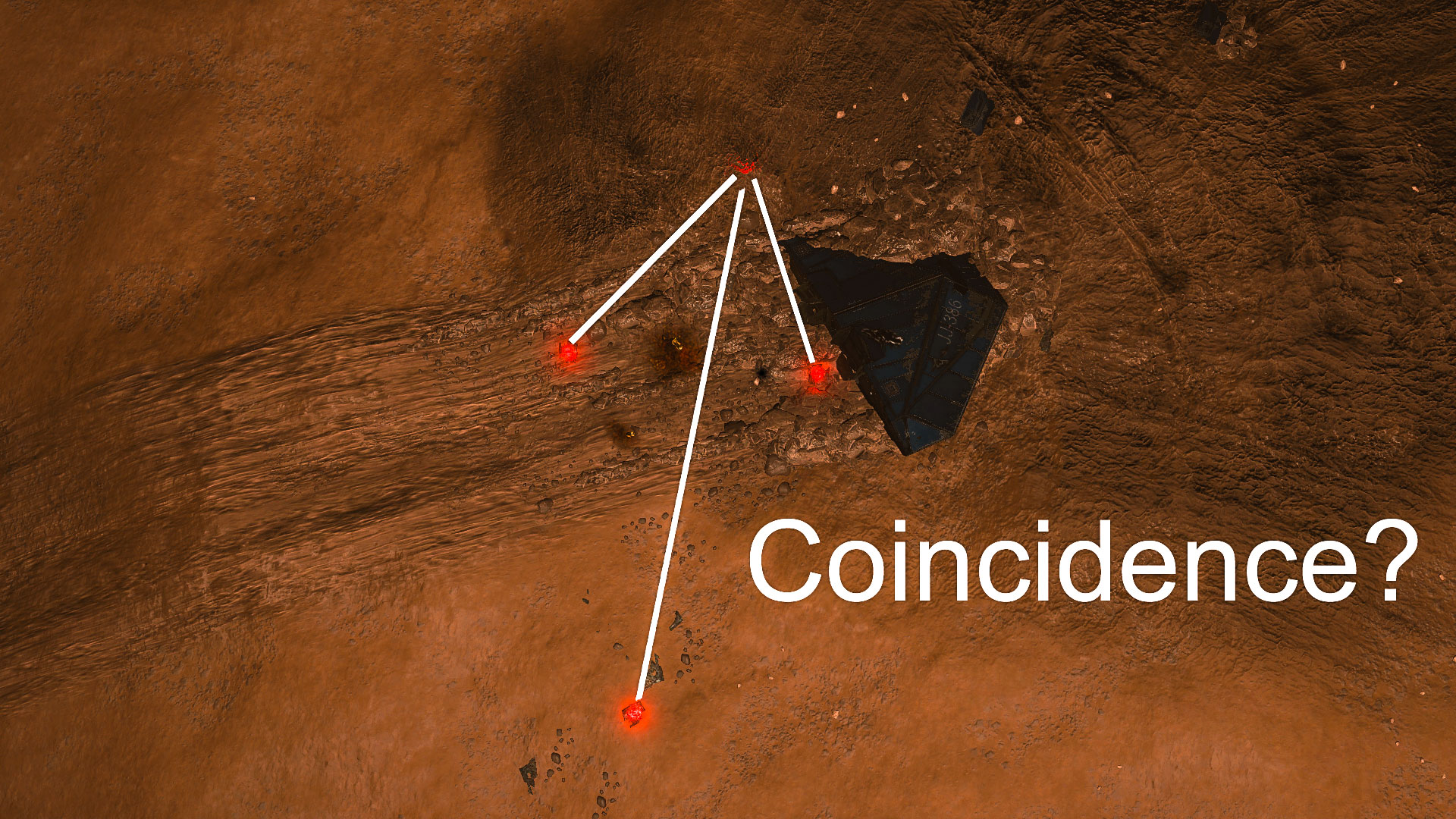 It was supposed to target their hyperdrives. That’s what they told me. Just the hyperdrives. So we’d be safe again. So we could live without fear. Well, it did a hel of a lot more than that. There were sensors on the payload so I could monitor the reaction and make sure it activated properly. I’m staring at the data now. The weapon is… lethal. They knew what it could do. They knew what it could do and they used it anyway. How many have we killed? Thousands? Millions? God forgive us.

Got myself into a bit of a situation here kiddo. My guess is that they installed a program in my ship and set it to trigger after I’d deployed the payload. All my systems are dead. The controls are out. Can’t even access the escape pod. And the ship is on a colloision course. And there is nothing I can do about it.

“We need to inspect your ship, Commander.”

How did I fall for a ruse like that? Oh god. I’m at least partly to blame. I’ve gotten old, careless. I should have quit years ago. I guess I should have known they wouldn’t want me coming back.

The bugs are dangerous – no doubt about it – but er, well this is mass murder we’re talking about. You can understand why they’d want to keep it secret.

I know some men wouldn’t want to admit they’d killed thousands of sentient beings. I guess… I guess the guys back at base think they’re doing me a favour by burying me out here in the black. Personally, I’d rather people knew what happened. Even if I didn’t come out of it looking too good. I don’t have much time. There’s a big old planet in my viewport and it’s getting bigger by the second. People will talk about what I did, after I’m gone. The missions I flew, the things I accomplished. But there’s something I want you to remember. No matter what they say, whatever garlands they hang on my name, whatever they write on my tombstone.

You, you, were my greatest achievement, I love you son.